How to Fake a Moon Landing 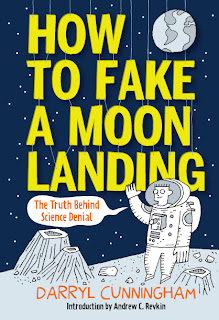 How to Fake a Moon Landing is a collection of essays about various topics having to do with scientific inquiry. It looks at issues of translating research into popular media and how conceptions and misconceptions are created. Lots of juicy topics are tackled, including climate change, the Apollo 11 moon landing, chiropractic, the MMR vaccine, fracking, and homeopathic cures. These essays are passionately argued, and well structured individually. The take-down of a certain Dr. Wakefield in regards to faulty research about connections between the MMR vaccine and autism is particularly thorough and eye-opening, but the rest are similarly compelling and well argued.

Still, after enjoying the author's last offering, Psychiatric Tales,so much, I felt let down by this book's lack of a framing sequence or explicit connections between essays save for two introductions. The former book was much more personal, and although this one is still well researched and presented, it smacks more of infotainment than it does of an aesthetic whole. As well argued as the essays are, they are separate entities that can be read entirely on their own. I would suggest taking one's time with this book and tackling each chapter over time, only because the topics vary and the essays do not hang together so well in a narrative sense. Still, the individual pieces are great examples of science reporting.

Author/illustrator Darryl Cunningham specializes in nonfiction comics, tackling diverse topics in his blog Darryl Cunningham Investigates. He primarily publishes online, but also has the aforementioned collection of his experiences as a health care assistant in a psychiatric facility. He speaks more about his work on this book in this interview with John Hogan as well as this one with Robot 6.

Cunningham's art is sturdy and straight-forward. I enjoyed his use of abstract stylized cartoons with occasional realistic, photographic drawings interspersed in the panels. His art is not flashy, but it does convey information and arguments in clear fashion. Here are a couple of different pages from the book that are characteristic of his style:

Although it is certainly written from a particular point of view, the book is not overtly didactic in its intentions, pushing readers more to think for themselves than to accept simple accounts of events or situations. In these interests, Cunningham includes many sources for his essays in the back matter so readers can verify what he said or go off and do their own fact checking.

Reviews I have read of the book online range from positive to lukewarm. Robert Greenberger wrote, "Cunningham does a remarkable job with difficult material and for high school students, just opening their eyes to the world around them, this is a terrific primer." The reviewer at Geeks of Doom called it "fun and informative without being preachy." Nick Smith was slightly less enthusiastic, stating, "The artwork is cartoony, which may distract some readers from the serious nature of the information presented," but added,  "the book is readable by teens, if they’re interested in science."

How to Fake a Moon Landing is published by Abrams ComicArts. They offer a teaching guide and more here. Here is a short excerpt at Boing Boing.

Hope you liked the Teaching Guide I developed (I believe I posted it to this group when it came out) -- but even if you're not a fan, I hope you'll see that I tried my best to provide unifying concepts and critical thinking skills across the various topics/chapters.

Peter, I thought your study guide was great and complemented the book very well :)