The US Constituion: A Graphic Adaptation 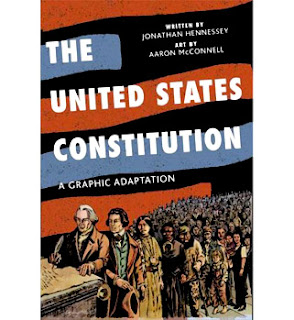 This graphic novel does three things extremely well: It explains the various parts of the US Constitution, places it in historical context, and also discusses ongoing contemporary controversies and issues. A wonderful tour through the British colonial period of the Thirteen Colonies foregrounds the path the US would take in founding its government until the present day, and the book's creators obviously have a love for depicting and explaining diverse periods of American history. They highlight key figures such as Alexander Hamilton, Thomas Jefferson, John Jay, and James Madison as well as shed light on pivotal incidents such as Shay's Rebellion, the Missouri Compromise, and the Civil War. Additionally, they explicate each amendmentand provide concrete examples and scenarios as well. Most impressively, they cover a wide swath of government and history while providing several sides to contentious topics.

Writer Jonathan Hennessey and artist Aaron McConnell collaborated to make a lively narrative that is chock full of facts and never boring. Hennessey is a veteran in film and television production, and McConnell is a member of Periscope Studio. He has worked on other nonfiction graphic novels including Forward 54th!.

The reviews I have seen for this book have been mostly positive. John Seven gushed that "the adaptation is a perfect way for kids to view the Constitution as a living document by showing it alive — and it’s not bad for reminding us older folks of the exact same thing." Charles Moss wrote, "The writing and illustrations are simple yet effective in bringing understanding to some of the most misunderstood U.S. laws." Educator Pete Hammerfinds much good in the book advises readers to check out "this graphic presentation that explains the Constitution in modern English."

A trailer, preview, study guide and more resources are available here from the book's publisher Hill and Wang.