Across the Pond: Teaching Twitter Could Become a Class Act (see priceless photo)

Frank Baker hipped me to this article from the Sydeny Morning Herald in Australia about British primary school teachers...

This seems to be a really silly debate exacerbated by a sensatinoal caption. 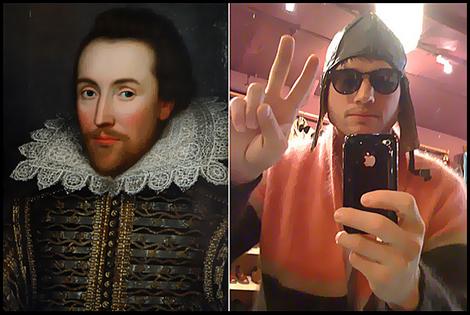 British school students may soon be learning about William Shakespeare and Ashton Kutcher.

Stephen Hutcheon
March 26, 2009 - 1:22PM
British schoolchildren may soon be studying the tweets of Ashton Kutcher along with the sonnets of Shakespeare.

A leaked Government report due to be released shortly, recommends that British primary school teachers be given much more flexibility in deciding what lessons to teach.

And while it emphasises the continued necessity of teaching traditional subjects such as spelling, history and arithmetic, it also recommends that students be taught about online media and instructed about web-based skills including how to use a spell checker.

The report, which was cited by The Guardian newspaper, is part of a Government initiative to radically overhaul the primary school curriculum.

One of the key proposals recommends that students be taught about online phenomena such as the online encyclopedia Wikipedia and the micro-blogging site Twitter.

The report would require "children to leave primary school familiar with blogging, podcasts, Wikipedia and Twitter as sources of information and forms of communication. They must gain 'fluency' in handwriting and keyboard skills, and learn how to use a spell checker alongside how to spell".

Twitter is a two-year-old service that allows you to broadcast - or "tweet" - 140-character text messages to the world. Among its many devotees are politicians and entertainers, including actor Ashton Kutcher, who is ranked as the world's fifth most "followed" Twitterer.

The plans were condemned by John Bangs of the National Union of Teachers.

"It seems to jump on the latest trends such as Wikipedia and Twitter," he told the newspaper.

In Australia, NSW HSC students were this year able to opt to take a course in studying Wikipedia - marking the first time in this country that the study of the online encyclopedia had been formally included in a syllabus.

Wikipedia, which ranks among the world's most visited sites, was listed by the NSW Board of Studies as a prescribed text for an elective course in the English syllabus for 2009-2012.

The website is one of a number of "texts" - a choice that also includes a book and a movie - that students can choose to study in an elective called the Global Village, a course examining how the world's communities communicate and interact.

Founded in 2001, Wikipedia is now available in more than 260 languages and attracts about 700 million visitors annually. The English editon alone contains more than 2.8 million articles.

Wikipedia is maintained by volunteers from all over the world and anyone with an internet connection can create and edit articles and publish them on the site.

However, because the site allows authors and editors to use pseudonyms, the system is open to abuse, vandalism and a selective telling of history that reflects an author's bias.