Like those famous semioticians, I'd argue that we’re all living in a symbolic world loaded with culturally constructed and contested meanings. I'd also argue that decoding and encoding symbols for meaning is the essence of this thing we call literacy.

In the 80's when E.D. Hirsch was busy defining Cultural Literacy, Paulo Freire was taking about literacy as “reading the word and the world.” Long before either of these literacies were popularized medieval monks articulated the same metaphor through the phrase liber munti - the "book of the world."

By the late 1980's "reading and writing" transformed into a panoply of literacies; economic, political, social, emotional, historical, mathematical, visual and media literacy are just a few of the terms that have become a part of our educational lexicon over the last twenty-five years.

Whether your trying to teach students the names of colors, how to read an equation, how to understand the periodic table, or how to understand a blog, educators are always engaging students in the work of decoding and encoding symbols. These actions, oft referred to as literacy, are at the heart of education.

Below is a short story called “Book from the Ground” created by the artist Chinese American Artist Xu Bing: Can you make sense of it? Some of the symbols look familiar, but is there a story here?

Maybe you need some guidance? Here’s a little blurb from Bing’s statement about his work, “Regarding Book from the Ground”...

Book from the Ground is a novel written in a "language of icons" that I have been collecting and organizing over the last few years. Regardless of cultural background, one should be able understand the text as long as one is thoroughly entangled in modern life. We have also created a "font library" computer program to accompany the book. The user can type English sentences (we are still limited in this way, but the next step will include Chinese and other major languages) and the computer will instantaneously translate them into this language of icons. It can function as a "dictionary," and in the future it will have practical applications.


Nicole and I first saw this piece at an exhibit called “Second Lives: Remixing The Ordinary” at the museum of Arts and Design (MAD) in New York. MAD builds on the arts and crafts movement made famous by William Morris in the late 19th Century by carefully blurring the hierarchies among art, craft, and design.


The three pieces above are also from the "Second Lives" exhibit. The vinyl records morphing into butterflies (My Back Pages by Paul Villinski) were featured in advertisements - that image was intriguing enough to convince us to head down to Columbus Circle to see the works in person.

The other images require deeper viewing to understand what materials are being remixed in their "second lives." Terese Agnew’s Portrait of a Textile Worker is a wall size tapestry. As you walk closer to the wall hanging you suddenly notice that the entire image was created by stitching clothing labels together. 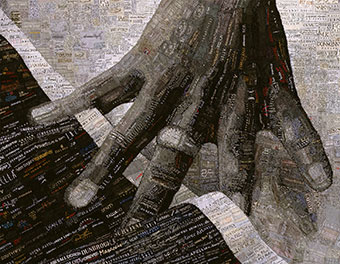 Deeply seeing this piece suddenly makes you think carefully about the people and labor that brings your clothing to life. A wall of clothing labels and the larger image they create become "symbolic" of much larger ideas.

The “Quarter Lounge” is made entirely of – you guessed it – "over 5000 Quarters, which required 27,000 welds to a substructure made of stainless steel." What does the use of this media/currency become symbolic of for you? 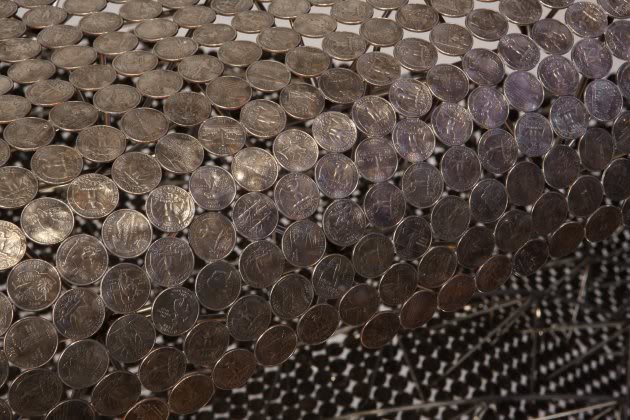 For the artist and the art teacher, these types of works open up a world of possibility. Joe Fusaro over at PBS's Art:21 talks about the educational power of these works in his blog “Remixing. Transformation.”

Works like these teach students to think beyond conventional art media. They teach students that you do not need expensive art supplies to create beautiful and unique objects that become something else in the hands of an artist…. And since so much in the world of contemporary art deals with transformation, this museum visit is an important step for my students to take in order to understand the breadth of visual possibilities in materials they encounter each and every day.


But most of us aren’t art teachers, so what do artworks like this have to teach us and our students?

"Culturally constructed symbolic codes" are commonly refereed to as "symbols" or "languages." Whenever I teach a novel, play or short story there is always, without fail, some student who asks, “do you really think the author intended to use that thing as a symbol?”

This question becomes an excuse to ask students if there were any symbols that had an impact on their lives. They often talk about clothing, traffic signals or musicians. They know about symbols in social groups - symbols and styles indigenous to Goths are different from the ones embraced by Hip-Hoppers, Metalheads, or Emo kids.

After they discuss symbols in their immediate environment I like move discussion to a symbol that is getting a lot of national media attention. Here are some interesting case studies from the last decade that might be give you some ideas...

"Bush and art: way beyond Mapplethorpe" = From The SanFrancisco Gate

NCAA Executive Committee Issues Guidelines For Use Of Native American Mascots At Championship Events - From NCAA.org

From here it is easy to talk with students about the practical and political power of symbols. It takes a long time for societies and cultures to agree on the meaning of codes and symbols - consensus can be formal, in informal or nonexistent when it comes to meaning.

The first three colored traffic lights were introduced in 1920. Creating common traffic signs and symbols became such a big international issue that the League of Nations (now the United Nations) created within the Ministry of Transport the Permanent Committee on Road Traffic in 1927. By 1934 the League’s Ministry of Transport issued a law that urged all municipalities and other road authorities to adapt the three-color system in traffic lights. Shared symbolic meaning became essential to ensure trans-national road safety in a decentralized Europe.

Looking carefully at symbols, their history and impact is not limited to those working in big disciplines like cultural studies and semiotics at the post-secondary level. We're constantly asked to decode symbols.

Can you decode this?

How about some outdated symbols? Here are the first lines of the famous epic poem Beowulf in Middle English aka Indeterminate Saxon.

Everyday, we have students in our classes who look at handouts, films or textbooks and feel as daunted as some of us are by as the symbolic codes above.

This is where Xu Bing’s “Book from the Ground” comes in as a powerful teaching tool.

Stay tuned for our tomorrow’s Decoding Symbolic Language/“Book From Above” lesson plan/PDF!

Permalink Reply by Wisdom on October 9, 2009 at 12:12pm
Ryan--Thank you so much for this posting! Completely fascinating! I'm looking forward to grabbing a copy of "Book from the Ground."

Permalink Reply by Ryan Goble on October 9, 2009 at 8:10pm
Oh Wise one - thanks for the thanks - hopefully you'll dig the follow up lesson plan. See you soon! RRG:)

Permalink Reply by Ryan Goble on October 9, 2009 at 8:14pm
Manal - You're such a fellow culture vulture - wasn't that exhibit off the "bottle cap."

It is strange - the discipline of "communication arts" is certainly out of vogue but the basic concepts are still very useful.

Hope you like the follow up lesson plan - very useful for foreign language teaching esp. your language!

Permalink Reply by Giannina Ferraro on October 27, 2009 at 12:45pm
In a related sense, this applies to the idea of tattoo-ing. I'm starting a unit on tattoos and finding self identity, having the students start with a book by Margot Mifflin, "The Blue Tattoo", and then having students branch out to find other cultures and their views on symbolism and tattoo-ing. Overall, I think the original basis of a "tattoo" as a symbol has expanded greatly into what we know today in our Western culture.

and actually, if anyone has any resources for me to use with this unit, it would be greatly appreciated. :D

Permalink Reply by Ryan Goble on November 6, 2009 at 9:30am
Gianna, First off, I must disclose that tattoos GROSS ME OUT - I realized it is mostly because I hate needles and blood so every time I see a tattoo I automatically think of the process instead of the artwork. This inadvertently puts me in the camp that perceives them as self-mutilation! I mention this as you'll have to keep in mind that they might gross students out or be against their religious beliefs - You'll want to make space for those points of view.

The Jewish religion has a "biblical ban on tattooing" that is an issue for some places of burial - interesting for kids to know about.

It is not every day I get to make a hyperlink to "askmoses.com" - their tag line is great "human questions - heavenly answers." Funny.

Now for the majority of folks who think tattoos are beautiful symbolic adornments on the human body here are two resources that might help you create some fun supplemental material - courtesy of my mom who knew about them both:

And this book: Dorothy Parker's Elbow: Tattoos on Writers, Writers on Tattoos by Kim Addonizio and Cheryl Dumesnil

Permalink Reply by Ryan Goble on November 12, 2009 at 3:13am
Giannia - did you see this Visual Lit article - it talks about tatoos and visual literacy - I think it is from your instructor!!!