Here are some photos taken around my neighborhood. Take a minute to soak them in.

My wife, Nicole and I live off 125th Street near Marcus Garvey Park in Central Harlem. 125th street is Harlem’s nervous center. As a result, we’re walking distance from two major sub lines, the Metro North commuter train, and about 7 bus routes. One of the bus routes is a 20-minutes to LaGuardia Airport. This is incredibly convenient unless - as was the case a few weeks ago – one is running painfully late to catch a plane during Friday afternoon rush hour. Nicole and I were in danger of missing our flight to Detroit for my brother’s graduation. We needed a yellow cab.

Yellow cabs are rare in our neighborhood but we were determined to find one. We wanted to avoid the overpriced haggling that accompanies Harlem’s more common mode of transportation - the Gypsy Cab. You may know about Gypsy Cabs from Wes Anderson’s film the Royal Tenenbaums. 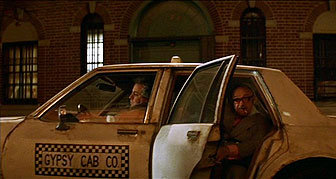 While those images are good for a laugh, they are extrapolations of reality. Gypsy cabs are usually Lincoln Town Cars or out of commission yellow cabs painted black. Some of them are VIP quality with leather upholstery; many of them trend toward hoopdie. 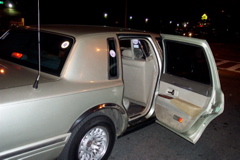 Gypsy cabs have no meters, but once you get a sense of the relationship between distance and cost it is easy to negotiate fair prices with two exceptions: if your heading to an airport or it's rush hour.

We had run down to 125th determined to hail an empty yellow cab as we dragged our luggage through the crowds. A few Gypsy Cabs flagged us down offering to take us to the airport for $70. Their starting price isn’t even in the ballpark of the $30 cab fare. Despite the fact that our flight was leaving in just over an hour we held out hope.

After 20-minutes we saw a parade of yellow cabs – but they were all occupied. Then - it happened - the clouds opened up and illuminated a single open yellow cab on the opposite side of Madison Avenue. I waved, made eye contact with the driver, he nodded, and I smiled. He turned on his off-duty lights, turned right on to 125th and lurched the curb like an undercover cop. We went all 21 Jump Street and weaved through foot and car traffic to meet our savior.

Before we crossed Madison a middle aged African-American man with a cane was turned away by our cabbie. Clearly, the heavens instructed our chariot driver to protect our seats by any means necessary. As the man walked away from the cab we opened its door and jumped in.

“LaGuardia Airport please?” It was written - we would make our flight.

“At your service.” To my untrained ear, I guessed our cabbie hailed from somewhere like Bangladesh, India or Pakistan. He clicked the meter, but traffic was at a standstill.

Suddenly, the African-American gentleman hobbled over to the front passenger window. He screamed at our cabbie, “Didn’t you just tell me you were off duty?”

“I was waiting for them.” The cabbie points to us but seems a bit unsure, almost nervous.

“This is the same old bullshit.” The man shakes his cane at our cabbie. “Same bullshit – different day.”

At this point, I’m pissed. This man is insinuating that I was complicit in a racially charged “cab theft.” I hailed this cab! I waved my hand, made EYE CONTACT with this cabbie from the other side of the street - all this before this man even saw the cab turn onto 125. Our driver was doing his job.

I blurted out the window, “This isn’t bullshit! We hailed him from across the street!”

The man on the sidewalk was not deterred, “It is bullshit and you know it!”

Nicole nudged me, “let it go.”

“No, I won’t let it go, this guy thinks we we're racist a-holes – I hailed the cab from the other side of Madison.”

Nicole, calm as two cucumbers, “I know, but there’s no need to escalate the situation.”

I was upset. One is always hypersensitive to race when you are a minority and we are certainly the minority in Harlem. I’m sure this man has been snubbed multiple times by cab drivers because of his skin color. I took a deep breath and hoped that my perceived wrong would be righted by some other, kinder soul not pressed by the tremors of each New York minute.

As we start moving on one-two-five, the cabbie turns to me. He’s noticeably shaken. “I was waiting to pick you up, right? You wanted a cab, right?”

Dr. Eric Kandel a Nobel Laureate who specializes in memory reminds us in his book In Search of Memory that we all fill in the blanks based on our points of view and the hardwiring of our brain.

I was too quick to fill in the blanks. I assumed that this man was not turning the man away because of race - he saw me flag him down, I was his mark. In retrospect, I should have been more mindful about the situation. Many a cabbie, including drivers of African birth, have driven us home and said slightly coded things like “you’ll make this neighborhood better” or “this place as come a long way in the last ten years.” These comments are coupled with less subtitle statements like, “I never come up here because these people don’t pay.” Each of these comments created awkward conversational moments where our point of view was at odds with the cabbie’s point of view.

The famous American philosopher William James wrote about attention in his seminal 1890 book The Principles of Psychology:

Millions of items…are present to my senses that never properly enter into my experience. Why? Because they have no interest for me. My experience is what I agree to attend to… Everyone knows what attention is. It is the taking possession by the mind, in clear and vivid form, of one out of what seem several simultaneously possible objects or trains of through. Focalization, concentration, of consciousness, are of its essence. It implies withdrawal from some things in order to deal effectively with others.

I can’t tell you how many times people of all different backgrounds ask Nicole and I, “do you feel safe in Harlem?” On a similar note, whenever I have been abroad and tell people I’m from Chicago they say, “Al Capone” in broken English and pretend to shoot a Tommy Gun into the air. They proceed to ask, “Is Chicago is safe with all the gangsters in your city?”

We do have occasional shootings in our neighborhood - I tell Nicole they are firecrackers. But if you look at the police blotter or, of late, the ledgers of Wall Street firms you’ll find shady, unsafe and questionable activity everywhere. It is just a matter of "what [you] agree to attend to."

While Harlem is “gentrifying” and as such is diversifying, it remains, and will continue to be, the hub of African-American culture. Generally, we’ve had a wonderful experience in the community. We tend to pay attention to the positive things about our neighborhood. People still say, "Good Morning" to each other all the time, and people are eager to help each other out. Harlem is rich in history and loaded with artists, writers, and political figures. You can always visit The Apollo, The Maysles Cinema, The Studio Museum or the world famous Abyssinian Baptist Church. President Clinton's offices are three blocks from our house and the neighborhood is loaded with interesting social initiatives like the Harlem Children’s Zone.

When I put the pictures at the top of this post I selected images without people to force you to fill in the blanks. How did those images influence your perception of my story and where we live? Where did your attention go? What did the images make you think about?

Now let me show you some other photos of our neighborhood.

Do these images coupled with my list of the positive attributes of Harlem mentioned above shift your point of view? How are these images different than the earlier images? Do these images and the details presented trigger different ideas and feelings?

Everyday, on the way to work, I have the privilege of walking past Langston Hughes’ brownstone. While I know that his devastating poem, “A Dream Differed” still holds true for many - I like to couple that poem with another Hughes work:

Looking around many situations one is always caught between “Dreams” and “Dreams Differed.” F. Scott Fitzgerald said, “The test of a first-rate intelligence is the ability to hold two opposed ideas in the mind at the same time, and still retain the ability to function. ”

This quote is a great reminder to us as teachers, learners, friends, lovers, family and citizens about the challenges created by multiple points of view. How do we approach situations loaded with contradictions, nuances and overlooked details with an open heart and mind?

My next post will continue to explore point of view. We’ll look at how it plays out in culture and across the curriculum. Please stay tuned as we visit with Galileo and bounce from Rashomon to restaurant reviews.