ARTICLE: She thought school was useless. Then she discovered The Catcher in the Rye.

This is an oldie but goodie from Teacher Magazine...

She thought school was useless. Then she discovered The Catcher in the Rye.
By Maureen Wanket

I first read The Catcher in the Rye, by J.D. Salinger, during a class called Reader's Response in my junior year of high school. I attended an upscale private school populated mostly by preppy types with whom I felt I had little in common. Once, when a teacher asked us to go around and say what each of us wanted to do when we grew up, more than half the girls said, "Marry wealthy"—without irony. I disdained many of my classmates' superficial goals and was glad (usually) that I was never asked to their boozy parties. I opted for a brooding persona, and I wrote cryptic messages in Sharpie pen on my canvas high-top sneakers, marking them up with curse words, song lyrics from B-sides of obscure British pop records, and lines from my own maudlin poetry. I had no idea what I wanted to be when I grew up, where I wanted to go to college, or whether I even wanted to go to college. All I knew was that I wasn't anything like my classmates. I wandered around in the negative space of their ambition and cheerful adherence to the unspoken rules of a game I didn't want to play.

In Reader's Response, I sat next to Jill, a shy and bespectacled girl who never tired of ironing her polo shirt collars or getting the pleats of the uniform skirt just right. I, on the other hand, pinned my pleats together with safety pins that I sometimes removed to use as earrings. This was a gesture largely ignored by teacher and classmates alike, with the exception of Jill, who warned that I could get an infection that way.

We had to read 10 books in the course of a semester. The teacher, Mr. O'Leary, was a 30-year veteran of the high school classroom. He was strict and could be intimidating with his booming voice and tough grading policy. Yet on the first day of class, Mr. O'Leary said that the only rule in Reader's Response was that we couldn't read anything by V.C. Andrews. Other than that, the choices were ours. He required us to keep short but daily journals on our reading. Once in a while, we had to write review essays. 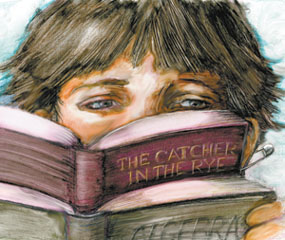 I had a hard time at first coming up with a list of 10 books. I generally liked to read, but I couldn't think of more than six. Mr.O'Leary suggested Lord of the Flies, Tess of the D'Urbervilles, and A Tale of Two Cities. But before those, he said I should read The Catcher in the Rye. OK, whatever, I thought. I added it to the list.


I defied Mr. O'Leary and read Lord of the Flies first. It was pretty good. I wrote a few journal entries, and I continued to stick my ears with safety pins and scandalize Jill with my profane high-tops. Then I started The Catcher in the Rye. By the time the 45-minute class ended, I was lifted out of my sneakers, out of my life and into Holden's, a boy I alternately wanted to smack and salute. Kind of how I felt about myself, most days.


I read that book in its entirety without once putting it down. I stuck it in my French text and read it clandestinely during fifth period. I propped up my algebra book and continued reading unchecked through sixth. I went home and eschewed all other homework. I read past my bedtime. When I finished, I lay awake, unable to sleep.


The carousel stuck with me the most, the one in the scene where Holden and his little sister, Phoebe, visit a park and he pays for her ride on the beat-up old attraction of his own youth. And poor Phoebe stuck with me, too, her trying desperately to talk sense into her nihilistic brother. "You never like anything," she says. I was as frustrated with him as Phoebe was.


And yet, I agreed with Holden. School was pointless. Like him, I knew I was trapped in a system that had put me on a road toward an uninteresting destination. I recognized in Holden my own desire for human connection, for relationships, and for some sense of authenticity in my life and in my interactions with others. I wrote my ideas in a long journal entry for The Catcher in the Rye.


The next day, Mr. O'Leary gave an essay assignment. I transcribed my journal and added to it. I spent a lot of time on the essay because it mattered deeply that I get it just right. I needed to say that Holden was not spoiled or lazy but an honest, vulnerable person searching for truth in a flawed society that valued only material wealth and its corresponding social status.


The day the essay was due, I turned it in, then opened the next book on my list. Mr. O'Leary sat up front, reading our essays. Right before the bell rang, I joined the other students in the rush for the door. Suddenly Mr. O'Leary stood up from his desk, our papers in hand. He called my name, and something in his tone of voice made us all turn and look at him. We got quiet and waited to see whether I was in trouble.


He held up my paper. "This is the best essay in the class. You understand The Catcher in the Rye in a way most students never do at first. This is fine work."


He handed the paper back to me with a big, fat A written across the top.


Jill looked at me with a mixture of admiration and jealousy. One or two other students sincerely congratulated me. Most of them looked at each other and shrugged, then went out the door as the bell rang. I, however, walked away a changed person.


I still didn't feel like I fit in at school. And because I fudged my way through A Tale of Two Cities, I really only read nine of the 10 books I was supposed to. Yet when I look back at my life—as a reader, a college English major, a middle and high school English teacher, and a writer—I see an important beginning in that moment of recognition from Mr. O'Leary. In the culmination of my study, enjoyment, and ownership of The Catcher in the Rye, my life path became clear to me. Standing at the classroom door that day, I understood that I wanted to read books and express my ideas in writing for a living. For life. And that nothing else would do. It was the day that I started becoming who I am.


These organic moments between a student and a book he or she loves, and between a student and a teacher who truly cares, have nothing to do with tests or mandates from politicians removed from the unique alchemy that takes place in an effective teacher's classroom. Now, as I teach my students the literature of the curriculum, I do so with reverence and with the understanding that, today, one of them could have a "moment," when the reality of life coalesces just right with a literary selection.


So often, the perfect bit of encouragement from a teacher helps a student see him- or herself in an entirely different, more hopeful light. It's the kind of learning experience that happens teacher by teacher, student by student, one by one. And it most benefits those students who find themselves straggling—but will hopefully never be left—behind.


Maureen Wanket is a freelance writer and an English teacher at Loretto High School, an all-female Catholic school in Sacramento, California.