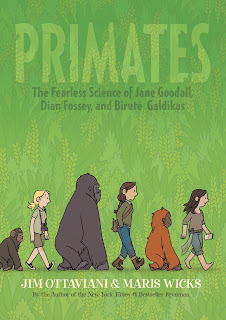 Primates is a  melange of three biographies of female scientists joined by their research interests in the great apes and the roots of their academic work. All three all began getting their funded projects through Louis Leakey, a huge figure in the search for the ancestry of humankind. He felt that women were especially suited for scientific work beyond men because of their patience and ability to perceive differently. He also had a wandering eye, which complicated his marriage and also perhaps led to some of the attention and opportunity he gave this trio.

Regardless of their work's geneses, all three ended up doing pivotal and important work on primates, their behaviors, their biological workings, and also protecting the animals and their habitats. Jane Goodall studied chimpanzees, discovering much about how they lived and used tools. This last finding was especially important to Dr. Leakey's work and it is playfully portrayed in the book:

Dian Fossey studied gorillas and found them gentle and noble herbivores, not at all like typical media depictions as monsters like King Kong.

She was the expert on gorillas when she was alive and their most strident defender against poachers, which led to her untimely demise. Her work goes on via The Gorilla Fund.

Biruté Galdikas's work on orangutans was also groundbreaking, though she was frustrated at times by their rather lackluster lifestyle:

As with the others her stories focus on her experiences roughing it in the jungle and also dealing with relationships with other people in such settings.

Primates is the creation of writer Jim Ottaviani and Maris Wicks. Ottaviani has written a number of great graphic novels about scientific inquiry including ones about the early days of paleontology, the space race, physicist Niels Bohr, women science pioneers, and the more recent biography Feynman. Wicks has drawn a number of comics and minicomics, including Yes, Let's. She blogs about her work and also has a tumblr. This article sheds more light on both of their takes on this book.

I was especially taken with Wicks's clean and simple linework as well as her use of sound effects and other conventions to convey meaning in economical and effective manner. For instance, this page where Fossey first encounters gorillas is ripe with atmosphere:

Because of the brevity of the book, volumes of research and decades of work are deftly distilled into a small space. Nevertheless, this book serves as an excellent introduction into the work of Goodall, Fossey, and Galdikas that could inspire further reading or study of other primates (there's all kinds of further resources listed, too). I am especially struck by how well it demonstrates connections between the seemingly disparate fields of anthropology, archaeology, and zoology. This book is as much about how science works as it is about the works of specific scientists.

Reviews of the book I have read have been positive. Carl Zimmer of The New York Times expounded on the work of these women and praised this volume as " the kind of book that can produce new scientists" because of how it captures the joy and work of discovery. Kirkus Reviews summed up that it "provides an accessible introduction to Goodall’s, Fossey’s and Galdikas’ lives and work." Tasha Saecker at Walking Brain Cells called it "a stellar pick for school libraries and public libraries that will have children learning about scientific history without even realizing it."

Primates is another excellent graphic novel from the fine folks at First Second. They provide previews and a lot more here.

And a big thank you to Ottaviani and Wicks, who I met at HeroesCon this past weekend for signing my copy of this book. They are super nice and talented!