OK, this article was in the WaPo BUT I want to give props to a favorite bookstore - Brilliant Books in Traverse City, MI for sharing it via their newsletter. The first excerpt is from BB. The second excerpt is from the WaPo article where they site other studies. The big question it begs all teachers, specifically teachers of literature and literacy ... Do we want students to read through books and be assessed on them or do we want to develop lifelong readers. If the latter, there is work to be done!!!!

Leisure Reading at an All-Time Low?

Say it isn't so!  As Christopher Ingraham reports in the Washington Post, the amount of time Americans spend reading for pleasure each day is on the wane.  A large-scale time use study followed more than 25,000 Americans to see what it is we do with our time each day, and, according to the study, it's not reading. 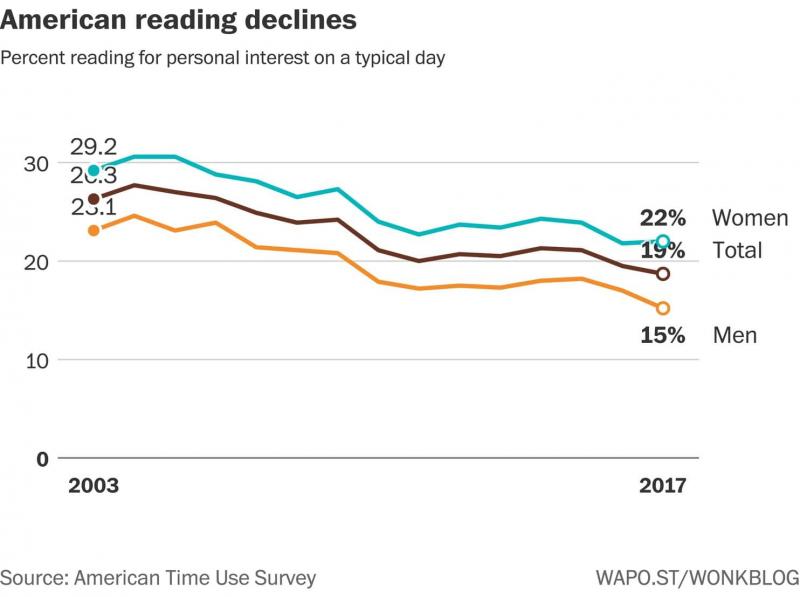 The study is fairly specific.  It's not talking about reading for information (such as reading the news or a recipe), but specifically pleasure reading, whether fiction or nonfiction.  The study found that the number of men who read for enjoyment each day declined 40% from 2004 to 2017, and for women, the drop was 29%.  All age groups (starting at age 15) saw a general decline, but it was most pronounced among 35-44 year olds.

Of course, the study doesn't take into account how much time readers are actually spending on a book when they do read.  It's possible what we're really seeing is more a trend for "binge reading" rather than daily practice.  Still, as booklovers, we can't help but be concerned, so we've got a few suggestions on how to reverse this trend.

The share of Americans who read for pleasure on a given day has fallen by more than 30 percent since 2004, according to the latest American Time Use Survey from the Bureau of Labor Statistics.

In 2004, roughly 28 percent of Americans age 15 and older read for pleasure on a given day. Last year, the figure was about 19 percent.

The findings on reading comport with some other recent data on American reading trends. Numbers from the National Endowment for the Arts show that the share of adults reading at least one novel, short story, poem or play in the prior year fell from 57 percent in 1982 to 43 percent in 2015.

Survey data from the Pew Research Center and Gallup have shown, meanwhile, that the share of adults not reading any book in a given year nearly tripled between 1978 and 2014.