ARTICLE+E-BOOK: How many words did the Bard invent?

The following is from Michigan Today - wild story - fun trivia! 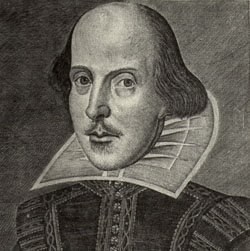 Wikipedia tells us that Shakespeare invented "around" 20,138 new words. One should bring more than one's usual skepticism to this claim if only because of the use of "around," as if there might be some dispute over whether the number was 20,137 or 20,139. But even if it had said "around 20,000" we still might be suspicious.

The straight-forward assumption that Shakespeare didn't invent so many words once got one of my former students, Carol W., in trouble in her first year of teaching at a small college. She repeated this observation to her students, one of them told her parents, the parents complained to the dean, and the dean called Carol in for a "frank discussion" over why she had diminished the great Shakespeare. Fortunately the dean was forgiving.

What's the basis for claiming that Shakespeare was so inventive?

It comes from dictionaries. Samuel Johnson (in 1755) quoted Shakespeare more than any other author: 7,549 times. Of course most of these words are quite ordinary and were well-established before Shakespeare was born. When the Oxford English Dictionary (1882-1933) came along there was Bartlett's concordance to Shakespeare, an index to all but the most minor words in the plays and poems. So the OED quoted Shakespeare 33,207 times. Many of these, too, were familiar and ordinary words. In just 2,192 entries does Shakespeare appear as the earliest example, a long way from 20,000.

Now that the OED is in the long process of revision, the number of Shakespeare's coinages and new senses goes continually downward. Some of these "antedatings" (as they are called) were discovered at the University of Michigan in the editing for the Middle English Dictionary (1952-2001). The editors of the OED are not to be faulted for carelessness; on the contrary, they worked wonders but they did not read the records of the English of 1150-1500 with the same minute attention as the Michigan lexicographers.

Michigan also did the groundwork for a dictionary of the English of 1475-1700, but the effort was suspended in 1942 with the outbreak of war. In the time from 1928 to 1942, editors at Michigan (and volunteers elsewhere) increased the reading until eventually more than 3.5 million quotation slips were sent to Oxford. These, too, showed that Shakespeare had a good ear for the language he heard (and read), but they diminished his reputation as an innovator.

Now we know that Shakespeare was a genius at using the material he found to hand by knowing the hand he was dealt. In fact, he used 20,138 words altogether—but not very many were new.

Richard W. Bailey is Professor Emeritus of English Language and Literature at the University of Michigan. His latest publication (co-edited with Colette Moore and Marilyn Miller) is an edition of a chronicle of daily life in London written by a merchant in the middle of the sixteenth century. This electronic book incorporates images of the manuscript, a transcript of the writing it contains, and a modernization of the text for easy reading. Thanks to the University of Michigan Library and the University Press, the work is freely available to all: http://www.hti.umich.edu/m/machyn.