This post is a place to collect Hamlet teaching reources & Allusions. The post was started in 2009 and updated March 5, 2015 to include many suggestions from MC POPPERS below.

My favorite loose retelling of Hamlet is the film Strange Brew. After that you've got to love the Simpson's Hamlet (with some Homer thrown in) "Tales from the Public...

This American Life Act V
We devote this entire episode to one story: Over the course of six months, reporter and TAL contributor Jack Hitt followed a group of inmates at a high-security prison as they rehearsed and staged a production of the last act—Act V—of Hamlet.

Hamlet 2 not totally OK to show the whole film in class. Just clips!

This little gem from Sesame Street Monsterpiece Theater is priceless:

Hamlet Goes Business (1987)
Having tackled Dostoevsky with his first feature, Finnish malcontent Aki Kaurismäki confronted Shakespeare with his fourth: the somewhat clueless son of a deceased business magnate is visited by his father’s ghost and, finally, given something to do. Lusciously shot in black and white and edited with the crisp pace of a B-movie, Hamlet Goes Business is remarkably faithful to its source—albeit rendered in Kaurismäki’s trademark deadpan style. The final act, in which Hamlet re-stages his version of The Murder of Gonzago, is one of the comic highpoints of the director’s career.

Thy Name Is Woman- “To be or not to be a female Hamlet - that is still the question."

ShrinkLits: Seventy of the World's Towering Classics Cut Down to Size
Ophelia Joined the Group Maidens Who Don't Float: Classic Lit Signs...
Twitterature: The World's Greatest Books in Twenty Tweets or Less plus an NPR interviewwith the author.
Infographic Guide to Literature (Infographic Guides)
Texts from Jane Eyre: And Other Conversations with Your Favorite Li...
Tales from Shakespeare Paperback(these are amazing 4 page comics of shakespeare plays - a hybrid children’s book / comic)
More Tales from Shakespeare 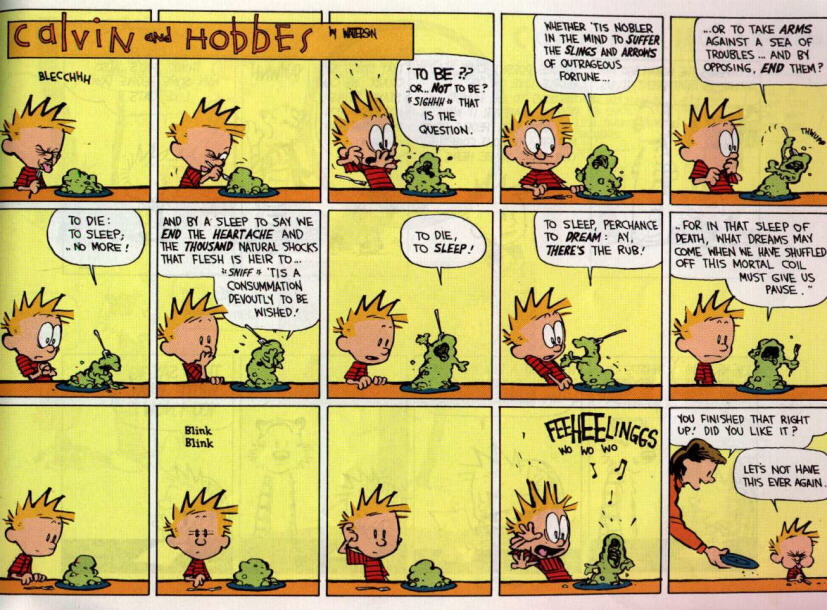 Permalink Reply by Jennifer Lee on April 15, 2009 at 2:38pm
It isn't Hamlet "straight up" but, I love Tom Stoppard's play Rosenkrantz and Guildenstern are Dead which tells the Hamlet story from these minor characters' point of view.

It was made into a movie with Gary Oldman and Tim Roth in the leads as well as Richard Dreyfuss as The Player whose character is featured heavily in this version.


And another showcasing Hamlet and Polonius (and the weirdness that is soliliquizing)...

Permalink Reply by Patricia Cone on April 15, 2009 at 10:09pm
I think there is a video (and a Fringe play) called The Complete Works of Shakespeare in 90 Minutes. They do Hamlet forwards AND backwards.

Permalink Reply by Ryan Goble on April 20, 2009 at 7:57am
Oh yeah, That's right - I mentioned in the MacBeth post that the Reduced Shakespeare Company does a wonderful short Hamlet - you can buy this on DVD or watch the clip here...

Also, I forgot to mention Hamlet 2 - this film is written by a former South Park Writer. When I saw it in the theatre this fall I remember thinking there is no way you could use this film in its entirety in a class due to Super-R content - however, there are lots of wonderful very teachable clips in the film that make it worthwhile and funny to watch or buy the whole film. Trailer here:

These are fabulous. Where did you get the "rights" or these copies? Who do I contact for them?

Veggie Tales does a version of Hamlet called "Omelet" and changes some of the story to be more about sharing.... but students like it.

I also use Calvin & Hobbe's "To be or not to be..." comic as a introduction.
Attachments:

Well, first off all these clips are out there on the web - if they are in violation of any copyright issues the copyright holders can pull them off-line. Since this is a password protected website dealing with media literacy, education and pop culture we're safely in the fair use zone. For more on this see Dr. Renee Hobbs Renee Hobbs work at Temple's Media Education Lab she wrote a nice short overview on fair use for NCTE and has a monster website at Temple that includes the Code of Best Practices for Fair Use in Media Literacy Education.

Glad you liked the resources everyone has put up and I know at least one other teacher (at my school) LOVED your C & H comic. You know it is awesome that you attached. You might also consider uploading jpegs into your discussion by clicking the camera icon above your comments so that it just comes up right away in the post for everyone to see.

Thanks for sharing your stuff and glad you liked the thread!

Having tackled Dostoevsky with his first feature, Finnish malcontent Aki Kaurismäki confronted Shakespeare with his fourth: the somewhat clueless son of a deceased business magnate is visited by his father’s ghost and, finally, given something to do. Lusciously shot in black and white and edited with the crisp pace of a B-movie, Hamlet Goes Business is remarkably faithful to its source—albeit rendered in Kaurismäki’s trademark deadpan style. The final act, in which Hamlet re-stages his version of The Murder of Gonzago, is one of the comic highpoints of the director’s career.

Permalink Reply by Jeannean Berglund on December 22, 2009 at 8:23pm
THere is also a work called the 15 minute Hamlet (I'll look up more info when I return from break). If you have a few comedic hams in your class, give them that script, some crayons, paper, scissors, and a few old sheets and turn them loose. It's quite hysterical to see Hamlet turned into a comedy.

Also, my favorite retelling is The Story of Edgar Sawtelle. I LOVE this book!

Permalink Reply by Ryan Goble on December 22, 2009 at 8:32pm
You and Oprah, eh :) Thanks for sharing!! Do tell us more on the 15 minute Hamlet when you return from break!

In the meantime have a wonderful holiday - it is great to have you here!

Permalink Reply by Megan Allen on January 20, 2010 at 11:18am
I was going to say this would be a great opener for class after looking at it to get them interesting in Hamlet. If you think about it all of Shakespeare's stories are retold over and over, so why not introduce the class to something they commonly watch like The Simpsons or The Lion King. I think this would be interesting.

As fo rmy favoirte retelling it's The Lion King. I know it's odd and strage but it's my favorite.

Permalink Reply by Ryan Goble on January 21, 2010 at 10:51am
Megan, Thanks for writing! These things tend to be nice "during reading" activities - I think, so that students don't resort to cliff notes and spark notes right away it is always good to do pre-reading like:

or, check out the blog about these incredible Classical Comics from the UK: