ARTICLE: Mathematical Notation Gets an Upgrade

I think this is a nice companion to the blog/lesson PLAYLIST: Decoding Symbolic Language Part 2 - 10 PDF PAGES OF FUN!

Mathematical Notation Gets an Upgrade
By Cameron Bird 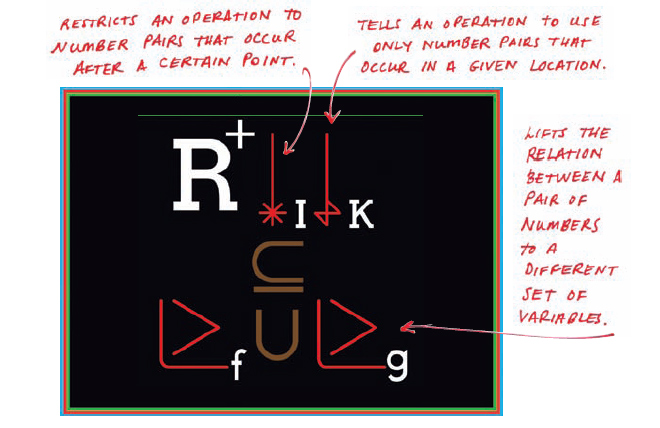 The equation above uses a few new math symbols (in red) to demonstrate a workaround for a nasty problem in computing.*
Formula artwork: Tauba Auerbach

For 70 years, mathematicians have been stuck on the Halting Problem: Computers occasionally hang on one line of code and fail to move on to the next, and no one can reliably predict when that will happen. (The result is the unending hourglass or pinwheel of death.) But a few years ago, Microsoft researcher Byron Cook and his colleagues did the unthinkable — they hacked a fix. When Cook tried to describe the workaround, however, he found it impossible to explain with existing mathematical symbols.

His only option, he decided, was to invent new ones. Cook phoned a friend, artist Tauba Auerbach, and after several months of brainstorming, the duo sketched out nine symbols, each of which indicates a function not easily describable with existing notation. Cook is applying the signs in a book on the Halting Problem and plans to submit them for inclusion in LaTeX, the typesetting program mathematicians use to publish their work. “Symbols change over time,” Cook says. “Some really convey what they’re after, and some don’t. Those that do stick.” Hopefully, Cook’s signs will stick around long enough to ensure a glitch-free future.”

* R denotes the transition relation of a computer program or system. + “closes” the relation, meaning the computer can get from one state to another via one or more R-steps.

means consider only pairs of states that are reachable starting from I states.

means consider only pairs of states that are at location K.

means the line above is a subset or sub-relation of the line below. U, or union, makes a new relation or set out of the relations or sets that are passed to it. Thus, the lifting of f, or

, is one of the relations, and the lifting of g, or

, is the other. So, if this formula is true for a given R, and f and g are mappings into “well-orders,” then the program is moving from one state to the next. Got that?


The full text has images for the symbols that are not showing up here: http://www.wired.com/magazine/2009/11/st_goodsigns/