Interesting article from the NY Times... 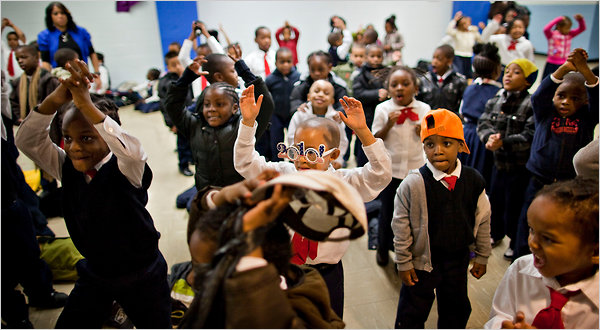 Sixty children in a first-grade class can get loud — sometimes too loud for a teacher to explain a lesson.
So while waiting for her teacher to come by, one little girl arranged the pennies she had been given to practice subtraction into a smiley face. Another shook her pennies in a plastic bag. A high-pitched argument broke out over someone’s missing quarter.

“We don’t know what we are supposed to be doing, but we are learning about math,” Thea Burnett, 6, said.

Across the room, a second teacher, Jennifer McSorley, successfully led the class’s weakest students in a counting rhyme. But when she leaned forward out of her chair to write a word on an easel, a 6-year-old boy moved it, and she fell when she tried to sit back down.

“Jahmeer, sit down,” Ms. McSorley demanded, unharmed but flustered. “I could have hurt myself very badly.” Then another boy ran off to hide under an easel. Someone grabbed someone else’s pennies. The noise snowballed.

All this was the early stages of an audacious public education experiment taking place in Crown Heights, Brooklyn, one that its founder hopes will revolutionize both how students learn and how teachers are trained. Instead of assigning one teacher to roughly 25 children, the New American Academy began the school year with four teachers in large, open classrooms of 60 students. The school stresses student independence over teacher-led lessons, scientific inquiry over rote memorization and freedom and self-expression over strict structure and discipline. The founder, Shimon Waronker, developed the idea with several other graduate students at Harvard. It draws its inspiration, he said, from Phillips Exeter Academy, an elite boarding high school in New Hampshire where students in small classes work collaboratively and hold discussions around tables.

Permalink Reply by Kelly Farrow on January 17, 2011 at 3:35pm
Isn't this just another spin on the old "open-concept school" method? We have 2 open concept schools in our district, and while they run very well (from what I hear), I break into hives when I think about teaching in one of them (b/c I like to get loud myself every now and then)! This sounds like a new coat of paint on that old (failed) idea...