Point (laughs) and counterpoints. It starts with this image from Facebook: 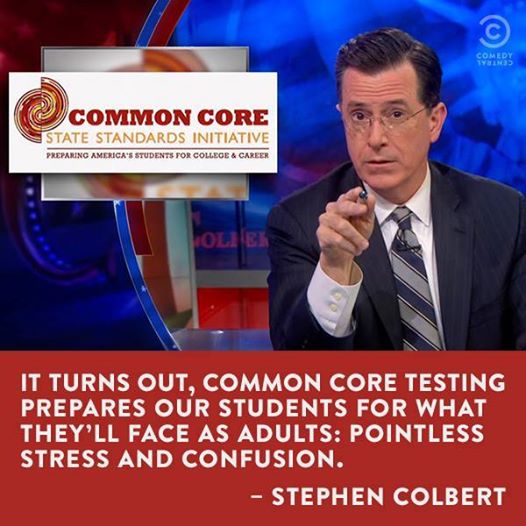 Then the Colbert clip -

Then an excellent counterpoint at Slate by University of Wisconsin math professor and author of How Not to Be Wrong Jordan Ellenberg. Somc excerpts...

And then there’s the “number sentence.” OK, number sentences aren’t actually mentioned anywhere in the Common Core, and they’ve been part of the math curriculum for decades. They sound weird and unfamiliar, though, which makes them fair game for schools-these-days tsk-tsk-ery. A New York principal argued in the Washington Post that the number sentence concept was too sophisticated for young children. And Stephen Colbert mocked the phrase, suggesting that students should also have the option of using “a word equation or formula paragraph.”

He also embeds this classic Tom Lehrer video on "new math" from the 1960s.

Permalink Reply by Michael Paul Goldenberg on September 7, 2014 at 2:36pm

Much as I like Stephen Colbert, he really gets it wrong on math education. While that's hardly unsurprising (I'm afraid that there are enough mathematicians and math educators who get it wrong that we don't really need uninformed input from amateurs to screw things up even further), his wide audience appeal and reputation for taking the air out of right-wingers and their hobby horses (to mix a metaphor) makes him a go-to guy for a lot of people who consider themselves to be progressives politically and/or educationally. And he frankly doesn't know his ass from third base on mathematics or its teaching and learning.

Of course, he has staff writers to come up with his schtick, so I don't necessarily believe that his take on Common Core math is his own analysis. And as someone who has opposed the Common Core juggernaut from the beginning, I have mixed feelings about criticizing his assault on it. But it's hard to miss the fact that when it comes to math education, much of what's being attacked has little, if anything, to do with the Common Core Initiative itself, its evil corporate/privatization agenda, or with the actual content of the CCSS Math Standards. And therein lies a serious problem that too many progressive critics of Common Core seem to miss or ignore. As I've been writing for about a year now, when the dust settles and Common Core is another long-forgotten, failed attempt at widespread reform of mathematics education, when Barack Obama and Arne Duncan have moved on to retirement or returned to the corporate world (where in theory they will do less harm), American math education will still need to struggle with its many weaknesses and failures, the need to reach a vastly higher percentage of students than we've been reaching for decade after decade, and serious issues of social justice, equity, relevance, etc. in our mathematics classrooms.

Sadly, mocking, ill-informed satires like Colbert's do far more harm than good when they are not well-grounded in meaningful knowledge of the fundamental issues. And in this particular case, Colbert and/or his staff just took cheap shots without much grasp of the complexities and subtleties of this latest phase of the Math Wars. Like Tom Lehrer's funny but mostly wrong-headed take on "the" New Math, Colbert has gone for the laugh instead of the substance. In the end, kids will be hurt more than helped by this particular attempt at comedy, and it's particularly sad given his power to really do something cutting-edge about education. I only hope he revisits this or related issues surrounding US public education and goes after the right targets in and incisive way in the near future.

I'm with you, I mean the laughs (and the quote) get at something, but - to your point - not the right thing. I did like the quotable from Colbert above but also put Ellenberg in for the thoughtful counterpoint. I think they (DS, Colbert, John Oliver, etc.) seem to have a better handle on their targets when it comes to things like big oil, corporate personhood, etc. etc. I don't think the general public is as aware of "big text" or the other forces driving the dialogue in DC. Interestingly, the substance of the CC to me is "meh" some good, some silly, some crazy - but that does miss the bigger point.

On the bigger point I thought the Rethinking Schools post in the Post "The Coming Common Core Meltdown" - was a nice speculative history. I'm afraid there might be too much money for it to hold up.