On Tuesday we found our hero Napoleon, at rock bottom trying to teach his students genetics. Your narrator/his coach, pretending to be some sort of Jedi master, prepared a coaching plan around The 4Ss and a bunch of literacy skills. Today they continue their quest to make curriculum pop….

Napoleon had done his homework; he watched The 6th Day and, didn’t even have to wait until the 7th day to think it was good and teachable. After a lot of discussion and preparation we decided to chunk the viewing around the major story lines (an vocabulary words) that would frame the core science and our final assessment:

Before I started designing an elaborate curriculum with Napoleon, I wanted us to do a little pre-pre viewing with the kids. I asked Napoleon which section of his biology class had the largest range of students. He quickly responded, “hands down third hour, it has the most IEP and ELL kids and they take a lot longer to do everything.”

Third hour was the perfect testing ground for our new story. When I looked at the materials Napoleon had been teaching with I knew the students didn’t have enough stories, structures, or supplies to engage with the content he was trying to teach. Four “failing” middle schools feed into our high school. That information coupled with previous observations of Napoleon’s class made it clear to me that these kids were fun and literate about a lot of things but science but they were very underexposed to the world of science. Even with this knowledge we needed to do some pre-pre viewing to see where his classes were.

I designed an open ended graphic organizer for the first 15 minutes of The 6th Day (see PDF attached at bottom) to collect basic impressions from the kids. However, even before showing the big chunk, we zeroed in on this 60-second opening clip from the film –

Find more videos like this on Making Curriculum Pop
What did you think the kids were going to struggle with after viewing this?

In order to get a quick snapshot of students’ thinking we gave two Post-Its to every student. We asked every kid to write down something that confused them or they had questions about. I expected questions like this:

Here we see a kid whose phonetic spelling suggests they might be an English language learner with Spanish as their native tongue – a safe bet since our school is 70% Latino. I thought this type of question would be typical because they wouldn’t have a lot of background knowledge about cloning but might “kind of know” what the word meant. There were a handful of similar responses that asked questions like “That is Dolly?” “What is a clone?” and “Why can’t we clone humans?” Each of these responses revealed the unstable nature of students’ background knowledge.

What we weren’t anticipating the large amount of responses that looked like this: 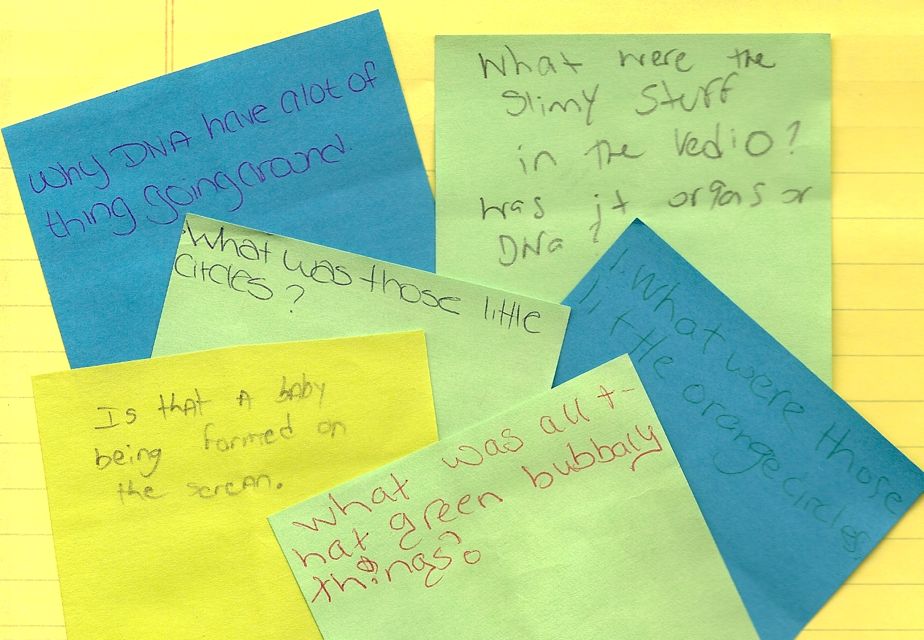 Find more videos like this on Making Curriculum Pop
See the red dots, maybe cells dividing? Meiosis, Mitosis? You might not have even noticed them on your first viewing because you know how to read for understanding. These little red dots completely mesmerized over half of the class!

When I told Nicole about our little experiment she started laughing. When we first moved to Manhattan she briefly, because of schedule conflicts, worked as a researcher at Sesame Street. She completed the three-day training on collecting data from kids before, during and after watching segments from The Street. She explained to me that the CTW research teams learned early in the show’s history that if they were trying to teach tots about the letter S and a furry monster like Elmo was in the frame holding the letter the essential content didn’t get through. In post-viewing interviews they asked the little ones what they saw. They would respond, “ELMO!”

When they used furry monsters to introduce a letter and then removed them from the frame to show only the letter they were trying to teach kids then students started learning. They would repeat the question “what did you see?” Since the monsters were out of frame the kids would report, “the letter S.” While I’m sure reading specialists have a name for this phenomenon, old school communication scholars simply call it “interference.”

Interference can cloud a message for 3-year-olds, adults and certainly 10th graders. Our little pre-pre viewing activity allowed us to quickly realize that the students didn’t understand:
1. A whole lot of vocabulary – this we anticipated.
2. What visual information was important to focus on - perhaps this shouldn’t have been a surprise – as we encounter this issue all the time in print, but we were caught off guard here. After all, the titles were right there in the center of the frame!

After showing this opening clip in all his classes Napoleon developed an interesting hypothesis. He thought the kids didn’t know what to pay attention to because they were unaware that the movie had started. He said he would have to go around to lab tables explaining, “this is the film!” They were accustomed to the filmic convention of opening credits where names on the screen don’t impact the story. In some ways, scanning the background can actually be a more helpful way to read a film because many directors use background shots to establish setting. Because the words were the main content many kids were tricked by the slight modification of convention.

This early data allowed me to “show” Napoleon how The 4 Ss play out in the classroom. It allowed us to see what additional supplies students needed as we built structures around a story. For one shining moment we were cool “data-driven” teachers with lots to learn from and think about as we prepared the remainder of the unit.

Napoleon, like an educational Odysseus has been at sea with this unit for a long time and we hope to return to his epic journey at a later date.

Please share any of your thoughts or related experiences below.

Permalink Reply by Jasmine Harper on March 12, 2009 at 10:39pm
Ryan, this was great and inspired me to think about how I use videos in my classroom!

Permalink Reply by Manal Grant on March 13, 2009 at 9:55am
Students seem to love generating questions and responses on the post-its, putting their thoughts in the air or on the wall on bits of color. I think it's important to let those students write in Spanish in the beginning if they are reluctant or unable to express a question in English.

Film is where it's at. So rich. I'd like to teach French through film exclusively :)