If you dig this article, consider joining the massive and very active Graphic Novels & Comics group!!

From "Inside Teacher's College" 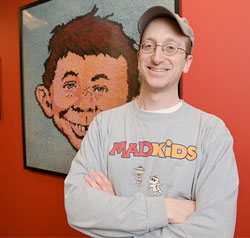 Jonathan Bresman now splits his time between Teachers College and the editorial offices of MAD Magazine, where he is the Senior Editor in charge of developing new talent.

Teachers College draws students from all around the globe, but Jonathan Bresman may be the first who comes to us via the desert planet of Tattooine. OK, he may not literally be Luke Skywalker's best friend, but you can see him playing, as he puts it, "the world's clumsiest stormtrooper" in remastered versions of The Empire Strikes Back -- just one of the wild turns his life has taken.

Case in point: Bresman now splits his time between Teachers College and the editorial offices of MAD Magazine, where he is the Senior Editor in charge of developing new talent. A rubber chicken hangs from a ceiling tile outside his office door. His Star Wars moment came from a previous job as a conceptual researcher at Lucasfilm, George Lucas's personal production company, and he's returned to that experience as editor of a new book: MAD About Star Wars: Thirty Years of Classic Parodies (Random House, 2007)

What does someone who works under the watchful gaze of Alfred E. Neuman gain from Teachers College? When he was at Lucasfilm, he taught a class on designing for sci-fi films to students, explaining to them in-depth how George Lucas's fictional universe worked. "I realized that, in order to teach these kids science fiction, we were also teaching them things like anatomy and physics. I found that intensely rewarding and started thinking -'Maybe there's something to entertainment and education after all.'"

He left the West Coast to enroll at TC in the Communication and Education Program, starting his job with MAD when he got here. Most of his work has been about how the brain processes comics and how that relates to education.

To Bresman, comics have tremendous, largely untapped, potential as educational resources: "People have a verbal track and a visual track in their brains. If you can use them at the same time, you get a lot more benefits. Comics force you to sequence images into a story, to constantly push yourself forward. You can't sit there and passively take it in like you can with a movie."

His dual roles, working in the industry he's analyzing, have served him well. "I know all these artists and editors who are doing the very things we're talking about. Want to see someone who plays with the concept of time and space well? I know that guy. Want to focus on the switch from wakefulness to a dream state? I know someone who's great at that."