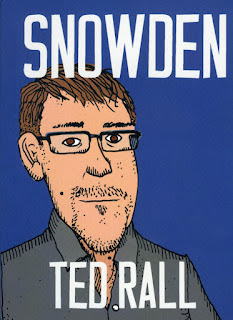 Ted Rall has been writing and drawing political comics and journalism for decades now. He has written critically about all stripes of politicians and leaders, including George W. Bush (Generallisimo El Busho) and Barak Obama (The Book of Obama). He has been an imbedded journalist in Afghanistan and a political cartoonist for a number of high profile publications, including the Los Angeles Times (who seem to have unjustly fired him). Rall's work can be something of an acquired taste, and he is infamous for his art style, which may generously be called primitive or raw but some find ugly or even incompetent. He also has a reputation for being a contrarian and gets into feuds (most famously a legal one with Danny Hellman). Whatever one feels about him politically or personally, I feel his work is an important counterpoint to much of the political rhetoric of our day.

With Snowden, I feel he has crafted a compelling book well worthy of attention. This biography of Edward Snowden begins with his childhood and moves through his childhood as a boy scout to his adulthood when he worked as a computer professional before working for the CIA and the NSA. Seeing what he felt was a corrupt system of surveillance and erosion of personal freedoms, he copied confidential files and leaked them to media sources. 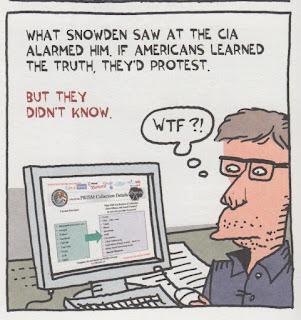 He became persona non grata in the United States and has since sought asylum in multiple places, most recently Russia. Very recently, the European Union voted not to extradite him to the US, so his status might finally change. Not only does this book chronicle his deeds in heroic fashion, it also tries to situate them in the current context. Rall likens what is happening in terms of government to a devolution of society into the dystopian police state of 1984. 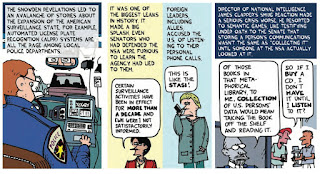 Clearly, this is a provocative book that wears its politics on its sleeve, and it pulls no punches. Rall provides plenty of references and footnotes to back up his thoughts and observations throughout the book. I feel it is a book that could be used with high school government or social studies classes for sure, and it will also be of interest to anyone who lives in the US, if even to get a view about some very serious matters that may be obscured by biased news coverage. It seems to me that a big part of this book is to flesh out Snowden's personality in contrast to the portrait currently painted in the US media. Rall explains more about why he chose to write Snowden in this article.

Most of the reviews I have read about this book have been positive. Jordan Minor called it "an entertaining, exhaustive, and approachable look at an incredibly important and relevant topic." Henry Chamberlain wrote that Rall lends a sense of warmth to Snowden, which makes this book "a most compelling read." James Helmsworth was more critical of the book's claims that we are living in a 1984 world but still concluded that it was "a fitting and functional portrait."

Snowden was published by Seven Stories Press, who have more information about it here.