The Age of Selfishness: Ayn Rand, Morality, and the Financial Crisis 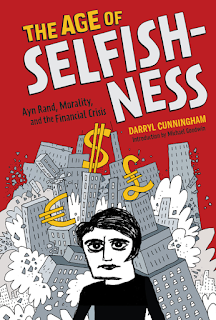 The Age of Selfishness is one of those books that makes me blanch that these things are called graphic "novels." This book is more of a graphic essay, told in three parts. The first is about Ayn Rand, a novelist who began a cultish group that resulted in the pseudo-philosophy called Objectivism where extreme selfishness is considered a virtue. Her life, which began in Russia, was marked by much heartbreak and some convoluted romantic situations. The author clearly has his take on her life, but much of what he posits seems firmly entrenched in facts. 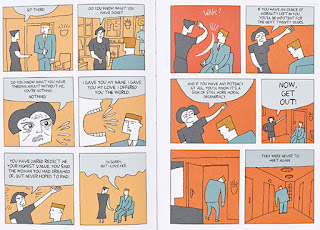 The second section of the book is about how the world arrived at the great economic crash of 2008, with a look at finance, banks, mortgages, and a few key individuals, including Alan Greenspan, a long-standing Rand acolyte. 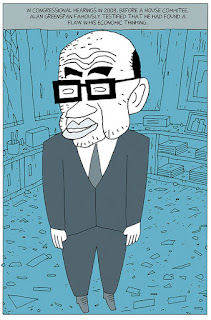 The third part looks at today's world by way of talking about libertarianism, conservatism, and liberalism. This book is certainly slanted in a particular point of view, but it is also well argued with much research and compelling facts, and it attempts to capture the pluses and minuses of these different political stances. 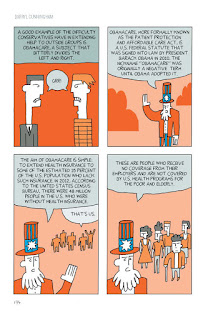 This book tackles much in terms of its content and arguments, and it could been have pretty dense. Some passages are require revisiting because of the complex concepts they cover, but overall the simple, clear illustrations make most concepts much more understandable. What is discussed here affects our world, and certainly will have an impact on the immediate future, and regardless of your political leanings I feel that this book is pretty much a "must-read."

Author/illustrator Darryl Cunningham specializes in nonfiction comics, tackling diverse topics in his blog Darryl Cunningham Investigates. He has also published two other graphic novels, one a collection of his experiences as a health care assistant in a psychiatric facility and the other about science denial. He speaks more about his work on this book in this interview.

All the reviews I have read about this book have been positive. Publishers Weekly gave it a starred review. John Yohe called it "a fascinating read" that "gives a really big picture of American (and British) economic history." Carla Sinclair called it "a well-researched, detail-packed book that I’ll need to read a few more times to fully digest." Andy and Derek from Comics Alternative found a lot of good in the book but wondered if it tried too hard to be balanced or if the arguments were consistent through the whole essay. Robert Kirby added, "This would be a challenging narrative to illustrate (hey, you try visualizing concepts like CDCs and derivatives), but Cunningham generally handles it with ease, clarifying complex financial terms and systems in easily comprehended visual language.

The Age of Selfishness was published by Abrams Books, and they have a preview and more here.