I’ve enjoyed these Shakespeare allusion/retelling posts as I have collected a lot of resources around his plays in my many years of English teaching. It is always exciting to hear what other people have used/found. I’m usually a few weeks behind on my magazine reading but some recent reading created an occasion to share MSND retellings/allusions. I came across a New Yorker story that follows in the tradition of Wide Sargasso Sea where characters from a famous literary work are remixed into new settings and situations. “A Tiny Feast” is a wild “short story about the faerie king and queen, Oberon and Titania, and their mortal son, who suffers from leukemia…” Just as the play MSND tackles the fickle nature of love, relationships, family and mortality this story explores the same themes in modern day San Francisco in about 8 pages. I’d give it three thumbs up!

There are other versions that have not been converted to DVD yet, but you can search the whole range of adaptations here at imdb.

Some wonderful companion films would be The Family Stone (2005, PG-13) and Woody Allen’s Midsummer Night’s Sex Comedy (1982, PG). These are both loose retellings of MSND. These films both have some adult content, but with a careful preview they can be great companion pieces for high school screenings. Another film that explores similar themes that kids enjoy although it doesn’t steal as freely from the Bard is Addicted to Love (1997, R). This is a great companion film starting Meg Ryan and Matthew Broderick. Because of the R rating you best get a permission slip for this one but it is one of Meg Ryan’s last great romantic comedies before a few procedures started making her lips look strangely similar to:

By far, the most inane MSND adaptation/retelling would have to be Porky’s II.
NOTE: PLEASE DON’T TRY TO SCREEN PORKY’S II IN YOUR CLASS. IF YOU ARE CRAZY AND DO THIS DO NOT TELL ANY ADMINISTRATORS OR PARENTS YOU GOT THIS IDEA FROM ME.

I must admit that my favorite retelling of this play was “A Midsummer’s Night Smackdown.” This was written by students during my first year teaching high school - it was a body slam to the soul. 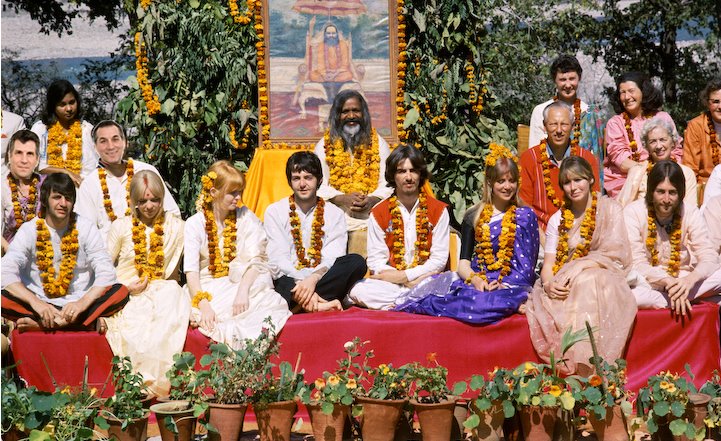 As far as allusions go, I don't have a lot collected on this one but in the book, With The Beatles the former editor of Harper’s, Lewis Lampham, talks about his journey to India with the Fab Four. On pages 115 and 116 Lampham shows off his Shakespearian skills:

“Nancy had arranges what she called “the visitation of modernity” through a connection through an important businessman whom she’d met in New Delhi at the Oberoi Hotel.
“Oberon?”
“No, Oberoi”
"Sorry, I thought you meant the king of the fairies …the real fairies, I mean the ones in Shakespeare’s forest with the fools.”

This passage, of course, is suggestive of the bizarre situation Lampham encountered “in the wild” with the Beatles, Mia Farrow and the Maharishi Mahesh Yogi during their “retreat” in India. Here is a wonderful photo collection documenting the event.

I have some outstanding materials at my parent’s home in Chicago (VHS) about a production of MSND I saw in Stratford, Ontario that I will try to add to this post at a later date.

In the meantime what are your favorite, comics, TV shows, songs, films (especially foreign ones) or articles that retell or make allusions to MSND?

This will allow you can track updates to this thread and see what fellow MC POPPERS shared!

If we shadows have offended,
Think but this, and all is mended,
That you have but slumber'd here
While these visions did appear!

Permalink Reply by Jasmine Tyler on May 6, 2009 at 9:01pm
Neil Gaiman does an awesome job of transforming this play in his Sandman series. It can be found in the third volume titled: Dream Country.

Permalink Reply by Jasmine Tyler on May 6, 2009 at 9:20pm
No, I think you have to be in the right place to "feel" Sandman. I have the series, but there are certain pieces that I feel better about than others. In its entirety it does some great things & I like how it plays into the Marlowe vs. Shakespeare controversy and it's handling of Greek mythology, but some of it is very dark, and disturbing. Plus, like most comics, it interweaves multiple story lines that are not completely clear until the end.

The treatment of AMND is what won Gaiman the controversial fantasy award (and created the rule change). It really does it very well.

Permalink Reply by Sean on July 2, 2009 at 10:45am
Get Over It, starring Ben Foster, Kirsten Dunst, Martin Short, Colin Hanks, Mila Kunis, Sisqo, and others in a fantastic cast, is a hilarious adaptation (though they change up the love square) in which the high school drama dept (directed by Short) puts on "A Midsummer Night's Dream" and the messy love square transfers to real life. Yikes! Some parts may be inappropriate for high schoolers (Swooze Kurtz dry humping on her sex relationships show or Carmen Electra as an S&M mistress), but it is still PG-13. At least I find this movie funny.